on your next order + exclusive offers

3D printing is picking up steam in recent times with new technologies, new manufacturers, and new users and fans.

The 3D printing market is one of the most trending technologies between hobbyists and professionals alike, and people from all backgrounds and professions are finding use within this industry.

Although the old manufacturing through injection molding still dominates the manufacturing industry, additive manufacturing technology has already taken full industries by storm, from rapid prototyping to medical guides, to dental use and many other aspects.

There are various types of 3d printers available on the market, starting from the good and old FDM printers that most people are familiar with and going up to some cool and upscale technologies such as Multi Jet Fusion (MJF) and Electron Beam Additive Manufacturing (EBAM) and many more.

But these professional 3D printers are costly and are only meant for high-end prototype and manufacturing businesses. The primary technologies available for the mass is

Vat polymerization. How it works

Vat polymerization is an additive manufacturing process in which a light source cures some liquid photopolymer and hardens it. It works by shining an ultraviolet (UV) light on a resin tank, caving the liquid layer by layer.

This technology is mainly used for jewelry, functional prototypes, and dental applications. And it is most known for its delicate touch, smooth surface finish, and detailed features.

Here is the step-by-step process of Vat polymerization.

Here is a nice diagram created by Additive Manufacturing Research Group that visually shows how the process works. 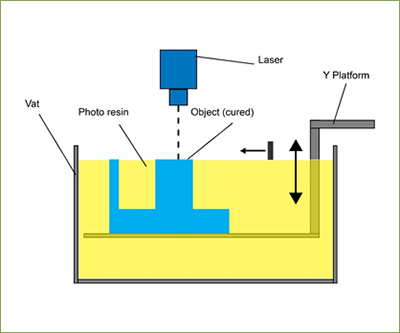 The three sub-technologies: SLA vs. MSLA vs. DLP

Get to know about the different SLA techniques and why you should choose one of them.

SLA works by using a powerful laser light source to cure the resin in the vat, it is doing it point by point until it finishes a layer, and then it starts the next one, curing the whole model.

Stereolithography is known to be the most precise 3D printing technology available. It has a smooth surface finish and can achieve fine feature definition, making it the best choice for medical dentel and other industries needing high resolution and precision.

The resolution of SLA is typically much better than DLP or MSLA because DLP and MSLA both rely on a digital projector to project the whole layer at once, which means that it is bound to the squared pixel size limitation. On the other hand, the resolution of SLA depends on its laser beam spot size.

Now, the downside of SLA is mainly its cost. It is pretty expensive, especially since most of the necessary materials are also highly expensive. Another issue can be the speed because it only cures part (point) of a layer at once vs. DLP, which cures a whole layer at once, resulting in better speed.

However, the main advantage of SLA lies in its resolution and print quality, and for some industries, it is much necessary, such as medical and dental fields, that it is well worth its price.

DLP and MSLA (LCD) vs SLA

As we mentioned above, the SLA process uses a laser beam to cure each and every part of your resin layer by itself to achieve the ultimate smooth surface finish. This results in increased print time.

The DLP and MSLA both work by creating a whole layer at once, curing the resin layer by layer until the whole model is cured. This is much faster than SLA, but it has less resolution due to its squared pixelized resolution

DLP uses a projector to reflect the light source on a wide space at once by using mirrors. This creates a digital model of the model surface layer-by-layer until the resulting 3D print is complete.

DLP is slightly more expensive than MSLA but still affordable compared to other SLA techniques.

But it has an advantage over MSLA because you don't need to replace the panel every so often as you have to do with the LCD panel of the MSLA printer.

Instead of the complicated mirror system in the DLP printer, the MSLA uses a mask to cover the light source.

In other words, it has a strong LED curing light over the whole build area, and underneath there is an LCD panel that covers all area that doesn't need to be cured on this specific layer.

It is cheaper than DLP and, of course, SLA, but the LCD panel needs to be changed after some time, which is another costly consumable for the printer

So which one is the better?

All three are great tools to have on your workbench. You just need to consider your workflow and usage needs and the technical properties you want to achieve.

If you create highly sensitive parts that need to be overly precise and have proper funds available, go for the SLA.

If you need to meet intense deadlines and get stuff done as fast as possible, then go after the DLP or MSLA.

Your funds are limited? Then your best option should be the affordable but still great MSLA machines.

And get 5% off your first order, and never miss a promo again